We - my wife, son and I - leave for San Jose in two days for the US Taekwondo National Championships. I willbe competing in the 1st Male Masters Division, for black belt men aged between 41-50. I don't know how good a chance I have of advancing to the next round or even placing for a medal on the winners' podium but I do feel better prepared this time around than I did at the US Team Trials in May.

For one thing, I've seen the process and felt the environment. One time on this advanced level doesn't make me a pro or anything close but I do feel that I understand the set up better and I know what to expect. I also have a better idea of what the judges are looking for. That, along with the training I got at the recent poomsae (forms) seminar I attended, have allowed me to train and prepare better. I feel that my forms are more current and I know better how each element should look in sport poomsae. I've also gotten into better shape. I've lost a few pounds but,  while I still want to lose a load more and get into my pre-married shape, more that that my body seems to have undergone a shape shift of some kind. I look and feel leaner, clothes and my dobok (uniforms) fit better and my flexibility has improved.

That's my physical training. In addition to that, there is my team and, first and foremost, are my wife and son. My wife watched the entire poomsae seminar from outside and took pictures and filmed videos of the instructor. As a result of that, she's been my eyes and, essentially, my coach. She's very kind and flattering, too. She's been saying that my forms now "look like those of the Olympians." There isn't Olympic Forms competition (yet) but I know what she means. I don't know if she truly believes what she's saying but is's nice to hear. She's, also, been trying to get me to get all negative thoughts out of my mind. As an athlete and martial artist, I know that to rid myself of doubt is crucial. And, for the most part, I've done so. It's just that I have a more realistic approach. My chances, while legitimate, are slim that I would make any kind of noise at The National Championship. Whatever the outcome of the tournament, she's been a great source of encouragement and she has a  gifted technical eye (coming from years of professional ballet and analysing technique and performance).

My son is the other part of the 'first and foremost' part of my team. He's gotten to a point of his development where he understands what Taekwondo is (something special that his dad and mum do) so his awareness has driven me to do my best for him to see, learn from and, even, emulate.

The other crucial parts of my team are my Taekwondo students. They've also been very encouraging. I teach  them, as it is, so I might as well perform for them too. Naturally, there are various friends in different circles who have asked about my preparation, wished me luck and said I'm going to do well.

Lastly, there are the masters and other athletes I've met through the training sessions I participated in with the New Jersey USA Taekwondo team, especially GrandmasterYoo, Master Kwon and the kids I've helped train for their poomsae contests.

I thank  all of my support crew. Without each and everyone of them, my foray back into fulltime Taekwondo teaching and training wouldn't have been a successful one. Regardless of the outcomes next Saturday, I'll be able to say I competed at Nationals. It's going to be a fun and exciting experience. Hopefully, I can turn all of that fun and excitement into gold.
Posted by Juan Rader Bas at 23:17 No comments:

Hi. How time flies. It's been a while since I posted anything - although it feels like I just posted the blog about my son - and I will post something new soon. I promise. In the meantime, here's a link to my latest Taekwondo adventure. I'll write more about it soon, as well as things like the coming summer holiday season, the end of the school year, etc, but for now enjoy this piece.

http://www.maplewoodnavigator.com/profiles/blogs/maplewood-teacher-bas-earns
Posted by Juan Rader Bas at 09:27 No comments:

There are many things in life that I want and hope for. To get my novel, Back Kicks And Broken Promises, published is one of them. To get back into shape and live a healthier and fitter life is another one. For Arsenal to win the Premier League and, even, the Champions' League is up on my list, too. But, really high up there is for my son to show some interest in martial arts. Maybe he'll never get as into it as I am. Maybe he'll never get his yellow belt, let alone a black one. If he tries martial arts though - the syle doesn't matter even though I am a longtime and committed Taekwondoist - that'll be good enough.

Well, things looked up in that regard the other night. Two nights ago, as a matter of fact. And it touched me so deeply that, literally, I almost lost it like a babbling infant. However, in warrior and true Bas fashion, I kept my emotions in check. Here's what happened:

As you may know, if you've been following my blog, I've been teaching Taekwondo again since January. I also competed in and won my poomsae (forms) division at the NJ State Taekwondo Championships and I competed in the 2011 USA Poomsae Team Trials. I'm also slated to participate in an all day (8am-8pm) Poomsae Seminar and test for my 6th dan, right after the seminar, next weekend. Lastly, for this year anyway, I'm going to compete at the US National Championships in July. After all of this, it'll be back to a quiet Taekwondo life of teaching and training without any of the big events.

Well, after winning States and qualifying for Team Trials and Nationals, my wife and I talked and we decided I had to pursue them. "Once in a lifetime opportunities" we said. I also decided that I would aggressively participate in these events for our son. Yes, I want my 6th dan and I'd love to have made the US Team that's going to Russia in July for The World Poomsae Championships and I'd love to be able to say I'm a national champion. I'm not going to lie and pretend none of that matters to me. However, what's really pushing me on is Jude. I want him to be exposed to all of this and to know about the culure of martial arts. Martial arts, after all, are what made - and continues to make - me who I am today. It would also be good for him to see his dad working hard and striving to achieve something; examples he can take with him in whatever he does. It'll also be cool for him to say that his dad competed at such a high level and, God willing, if I do well or win, be able to say something like, "My dad is a national champion." Haha.

So, throughout all of this, Jude has seen me teach and train. He's also seen his mother train, get her yellow belt and compete and win. Naturally, running a dojang (training hall), I've had to order equipment and uniforms. I should say, also, that last Halloween we got Jude his own dobok (uniform) that he could wear for trick or treating but with the hope that one day he will actually wear it for class. Well, the uniform was too big (it still is) so he ended up being Buzz Lightyear instead. And that was okay because he LOVES Toy Story and Buzz. 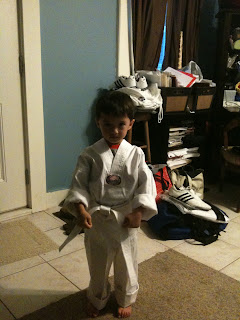 Jude in his joombi position
Okay, so here's the main event. Last Wednesday, one of my orders arrived with a uniform in it. I tried it on and took it off. Jude said, "Too big, daddy?" I told him it was fine and fit right. He then said he wanted his "Small Taekwondo." Guada and I melted. We brought him upstairs, Guada bathed him and we suited him up, belt and all. Then, we went back downstairs and he did some kicks and punches on a sheet of kicking film (before they actually made kicking film we just used to hit old x-rays). Some months ago, I'd already taught him charyut (attention), kungyet (bow) and joombi (ready). He did all of this on his own, in between kicks and punches, and at the end we shook hands just as if we were in a dojang and class was ending.

Seeing him kick and punch, bow and stand ready, I couldn't help from feel my heart melting. Every father wants his son or daughter to like the things he likes and pursue them. I think it's safe to say that. I'm not any different. However, it was extra rewarding because, like I said, I've gotten back into fulltime Taekwondo aggressively for him and to see him respond to it like this makes everything worth it. I hope he continues to show interest and age three is a good age to start. I just have to be careful to let him do it as he wants to and not push it and to allow him to do other things. 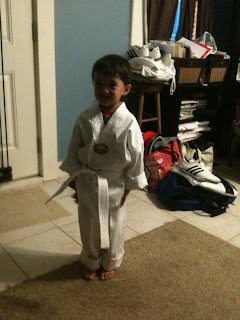 If he never gets his black belt, that's okay and perhaps martial arts isn't his thing. Seeing him the other night, though, and with the continued exposure he's going to get, I beg (and hope) to differ. We could be seeing the beginning of a Bas Taekwondo dynasty. Haha.
Posted by Juan Rader Bas at 13:04 No comments: