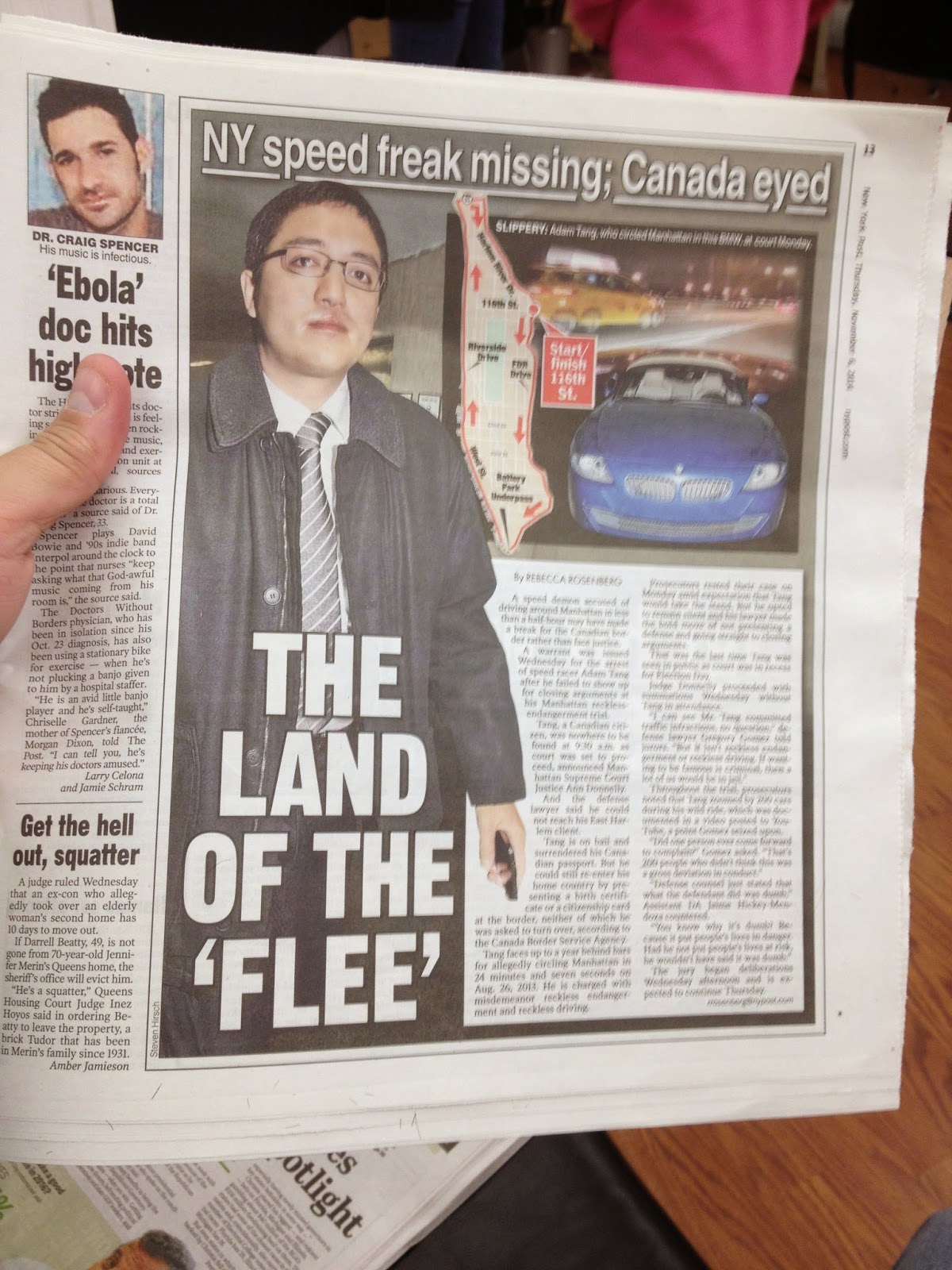 I'm not not PC but I also think that sometimes - perhaps, many times - we're too sensitive to things. I'm Asian American (Filipino and Chinese; American, of German decent, from my mother and with a touch of Spanish from my father). I've enjoyed a joke or two with racial overtones and I don't mind ethnic humour when it's smart and, quite simply, funny. Russell Peters, for example, is one of my favourite comedians and I'm jazzed to be seeing him live next month at Madison Square Garden. In his humour, he pokes fun at his own Indian heritage. He's also had a go at Filipinos and Hong Kong Chinese. Having lived in Hong Kong for sixteen years, I regard Hong Kong as my home and my hometown. But, Mr. Peters' humor is based on observations and character traits he has witnessed and, to be quite honest, what I have seen myself. And, he doesn't take cheap shots.

When an ethnic stab is done, however, cheaply and for pure exploitative intentions, I do take offense. When I first moved to America, I was received with statements likes "Oh my God, your English is so good." Or, "You grew up in Hong Kong, so you must speak Japanese." In some ways, these kinds of statements can almost be forgiven. They're largely based on ignorance. But, when I saw this newspaper - tabloid, really - piece a couple of weeks back, my Offended Asian Radar - my OAR, if you will - took notice and I wanted to hit the tabloid's editor upside the head with it. The Canadian speedster, of Chinese heritage, is a criminal and should be punished for his twenty-four minute race through Manhattan. However, to use the headline they did, the editors and writers of that tabloid should be ashamed of themselves. Scandal and offense sell as much as sex do but this was such a blatant stab at the stereotypical trait that Asians are unable to say the letter R, instead replacing it with a L. It is true that some Asians have this, for lack of a better word, affliction but that's simply due to accents and second languages. I've encountered many a native English speaker get defensive and downright offensive when their mistakes when attempting to speak a language foreign to them are pointed out. I suspect that the editors and writers of this piece may be among them. This headline, however, is such an offensive cheap shot.

I'm writing this post purely on my immediate gut reaction when I saw this headline. Like I said, it was two weeks ago. I gave it time to simmer and/or die down. Unfortunately - perhaps, fortunately - it has simmered and not died down. I can't even recall which New York tabloid it came from. I rarely read them but I was at the barber shop and picked it up as my son was getting his haircut. As I write this, a scary thought just popped into my head. I didn't check to see who the writer of the article is and who the tabloid's editors are. What's scary and, hopefully not the case, is the chance that either party is Asian or Asian American.

The bottom line, for me anyway, is that the writer's attempt at a pun was poorly executed. The tabloid has basically printed, in bold letters no less, a racial slur. The perpetrator's careless and reckless speeding had nothing to do with his ethnicity. So why bring it up? This wasn't a hate crime based on prejudice. It was a stupid man's attempt to do something he thought was cool. He could just as easily been white, black, brown or something in between.

Like I said, I don't even know which New York tabloid it was that published that headline. I also said I rarely read them as it is. Well, I am less likely to do so again.
Posted by Juan Rader Bas at 21:33 No comments:

Confidence and Passion: A Writer's Essential Allies...or, How To FeelGood And, Hopefully, Succeed At A Pitch Slam

It seems that the idea of change is on my mind. In one of the latest posts in my food blog, Panlasa, I talk about the changes in the way I make some dishes now compared to how I was taught to make them years ago. Here, I'm going to talk a little about the agent pitch session at this year's Writer's Digest Conference and how it has changed and how my tactical approach to pitching my work to agents may have also changed since the first time I participated in it in 2010.

I've participated in the pitch slam three times now. The first was, like I said, in 2010. That was the last year when it was part of Book Expo America (BEA) and Writer's Digest hosted BEA. The subsequent pitch sessions I attended were in 2011 and just this past August. In 2010 and 2011, I'd pitched my first (and, so far, only published) novel, Back Kicks And Broken a Promises. Unfortunately, it wasn't published through an agent, with a bestseller-making bid war and with the engine of a big traditional publishing house behind it.

When I pitched in 2010, I'd really done it just to get the experience. But I'm not going to lie. I did hold on to the dullest glimmer of hope that something might happen and I wasn't going to turn it away if it had. I'd have busted my butt to finish and polish my novel. The conference hosts's recommendation was for an author not to pitch unless his book was  finished or, with utmost certainty, the author knew exactly where his book was going. The pitch session was also part of the conference, not requiring a separate fee. I decided to pitch two agents. One is Asian. I chose her, yes, because of that. I'm Asian and Back Kicks has an Asian American protag, is strong in Asian themes and is set as much in Asia (Singapore and The Philippines) as it is in America (New Jersey). This agent did ask for a submission but she obviously passed and, naturally, I was bummed out. But, I was okay with it. I hadn't felt a strong vibe with her and, really, my novel was only about two thirds done. The other agent I pitched that year, who I pitched because she's from New Jersey, also passed but she was very pleasant, encouraged me to keep writing and said she'd welcome future queries from me.

In 2011, Back Kicks was finished and I was fully ready to put it out to the world. The agents I pitched were very receptive and gave my book - its pitch, anyway - some very encouraging and flattering words. Three of them - I pitched five in the time I had - said the story reminded them of Junot Diaz's Pulitzer Prize winning The Brief Wondrous Life Of Oscar Wao. All five agents requested pages and/or the book's synopsis. Alas, they all passed. So, feeling that my book was ready to go out and wanting to put some closure on it, I self-published it through Abbott Press, the then brand new indie publishing arm of Writer's Digest Magazine, in 2012. A year later, I made further revisions and updated my book with Abbott. Now, I can say I'm truly done with it. I'll still promote it and such but, in my mind and heart, it's a done deal and I can't and don't want to change it further. The agents I pitched in 2011 were YA generic, literary or adult fiction focused.

This time, I didnt just go in with the idea of a book or a newly finished manuscript. I went in with my heart and my mind. Huh? Back Kicks, like many first books, is semi-autobiographical. This can work both positively and negatively. For me, while there is a story with sub-plots, arcs and strong characters, I think it worked against me. I never like talking about myself. In typical writerly mystification, I have self-confidence and self-esteem issues and I don't think my life is very interesting yet I can write about parts of it, albeit fictionalising it, and share it with the world. So, because of my lack in self-confidence and, perhaps an artist's self-loathing, I likely didn't present myself all that passionately about my own book.

In 2014, it was a lot different. For one thing, I thoroughly researched my targets and went with the agents who, based on their bios provided by the conference organisers, were close to being a 'perfect fit.' What I've written is a YA fantasy auctioneer called Sky Warrior. It's a fun, educating and entertaining novel that I would want to read, even if I hadn't written it, and wish were a movie. There's nothing high falutin' about Sky Warrior. There's multiculturalism, action, martial arts, magic. What's not to like? Perhaps the difference in 2014 is that I'm coming to terms with what I want to write and not what I think I should be writing. At least for me, talking about and reading Back Kicks was like touring my own head. With Sky Warrior, it's a case of being taken somewhere far away and very different from where real life lives.

I pitched five agents last August. One was a movie producer and she asked me for a business card. Her partners have since passed but we're keeping our lines of communication open in case her partners change their minds and if I have anything else she might like. Two agents passed at The Pitch Slam but their bios didn't state they weren't into 'high fantasy,' which is what one of them called my novel. They both complimented me on my pitch, however. The other two were super excited. One, after I finished my pitch, said, "You had me at gung fu." Naturally, I was jazzed. I've since followed up with her and I'm still waiting to hear back. The other one was even more enthusiastic and we discovered that our sons both enjoy Nickelodeon's Avatar: The Last Airbender. I've followed up with her and she replied and she asked me to give her more time and said she'll get back to me soon. That's better than getting the broom.

So, if I can be so bold as to offer any kind of advice about pitching to agents, it's this: be passionate and know who you're talking to and/or know who you want to talk to. Nothing may come from what happened at The Pitch Slam last summer. Of course, I'm hopeful something will especially in light of how enthusiastic the agents I pitched responded to my novel. But, if nothing does, I know I can go with Sky Warrior to other agents feeling confident and passionate about it. And, nothing is more contagious and fostering in trust than confidence and passion.
Posted by Juan Rader Bas at 10:53 No comments: