We went for dim sum the other day. It’s been a while, probably since the summer, but this time was a little bit different.

As part of Jude’s bedtime ritual, we read him a book or two. If I’m the one putting Jude down, I tend to read him something that’s mostly text. I read that it’s good to do that because it help toddlers develop language and it plants the seed that books are good things, which they are. Naturally, as a writer and lover of books, I want Jude to develop an appreciation for them as I have. I’m currently reading him A Secret Shard by Linda Sui Park. When Guada’s putting Jude to bed, they read more picture-type books; things like Doctor Seuss and The Hungry Caterpillar, for example. Recently, they’ve been reading a pop-up book on Chinese New Year. (FYI, Chinese New Year begins on January 23 and it’s the Year of the Dragon.)

We, actually, got this book for Jude a couple of years ago but he’s more aware of its contents as he’s gotten older. So, when we decided to go for dim sum, my wife had the great idea of bringing the book with us. There’s a double page in it that shows a family celebrating Kung Hei Fat Choi at a dim sum restaurant. In the book, the lids of the baskets are pop-ups and inside the little offerings are labeled. So, as the waitresses came around with their carts and trays and we got what we normally get, Jude was able to see in real life what the family in the book was doing. It was a fun and fascinating learning experience for him. 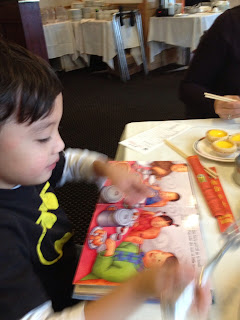 It’s funny, though, because we’ve been to dim sum before with him and he’s eaten the shiu mai and wu gok. We’d cut them into small pieces and he’d chow down. Such is the fussy eating habits of a toddler, I guess, because this time around he was only interested in the char siu, which he was calling ‘chicken’ and, eventually, ‘special Chinese chicken.’ He’s eaten pork and fish and beef before but he has to call it ‘chicken.’ I don’t know if he actually thinks they’re all the same or, at his age, anything that’s freshly cooked and is some kind of meat or, as we say in Tagalog, ulam (usually some kind of meat or fish or vegetable that’s eaten with plain rice) is simply called ‘chicken.’

At first, I was getting the char siu, using my chopsticks, putting it on his plate and cutting it with a fork into bite size pieces good for his toddler mouth. As the meal went on, he insisted I bring the char siu dish to him and he’d put pieces onto his plate using his own chopsticks. Naturally, I was extra alert making sure he didn’t make a mess or topple everything onto the floor. But, I did let him do it and it was fantastic to watch. He held his chopsticks, both of them, in his right hand. The way he was holding them I thought for sure he was simply going to stab at the meat. He didn’t. Instead, he lowered the tips of his chopsticks to the meat and, with his other hand, he made them pinch the meat the way chopsticks are supposed to be used. Then, in what reminded me of a construction site crane, Jude moved both hands, the chopsticks and char siu, in unison, over his plate and dropped the meat onto it. Amazing! 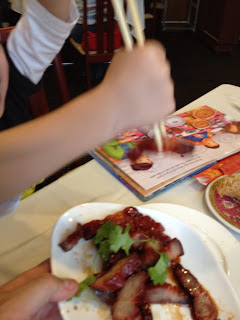 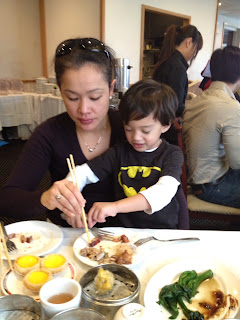 Jude and Guada getting ready to enjoy 'special Chinese chicken'

I was terrifically enthralled, proud, excited at his creativity and ingenuity. He didn’t just stab at the meat! He tried to use the chopsticks the way they’re supposed to be used. He interpreted how they’re used and modified that in a way so he could feel like he was doing it the correct way. I also got a warm sense of watching him manipulate the chopsticks and I’m looking forward to the day I can teach him how to use them properly; the way my father did, having me just hold one stick, balancing it and tapping it against a bowl. Then, he added the second and showed me how to keep the bottom one still while moving only the top one. My dad taught me this when my mother and sisters and brother were in The Philippines and my dad and I were in Hong Kong and it is, to this day, one of the most endearing and best memories I have of anything in my life.

With Jude getting older and his learning curve getting as high and steep as a K2 class mountain, I’m looking forward to teaching him things like this and, hopefully, they’ll be good memories for him as my chopsticks lesson with his grandfather is. Jude’s not even four though so there’s plenty of time to make these memories. In the meantime, we’ll continue to enjoy ‘special Chinese chicken’ and who knows what else. Hmm. Chinese New Year is coming up. I think a trip to Chinatown for lion dances might be in order.
Posted by Juan Rader Bas at 06:08